“There’s an electric tension in the air, the place never seemed so gay, so hectic, as tonight; the roads opening off the Bund a welter of blinking, flashing neon lights, in ideographs and Latin letters alike, as far as the eye can see. Traffic hopelessly snarled at every crossing, cops piping on their whistles, packed sidewalks, the blare of saxophones coming from taxi-dance mills, and overhead the feverish oriental stars competing with inter-crossed searchlight beams from some warships or other on the Whang-poo. Just about the right town and the right night to have fifteen thousand bucks in, all at one time. ” – Cornell Woolrich

I didn’t expect Shanghai to be so hot. It was an iron, skin-peeling heat. I looked on as our bus careened down the freeway, moving past the industrial buildings bellowing smoke out of its chimneys towards a city of gilded buildings.

The city had indeed changed since I was last there. I first came to Shanghai in 2003 for an HPAIR  conference as a 3rd year Political Economics student. We were a small group from the Philippines, all excited to meet fellow nerds from all over the world. Back then, Shanghai seemed darker, the smog thicker, the streets dirtier, and the people unfriendlier. Even the flickering neon lights were marred with secrets; exacerbating the darkness around it.

But present-day Shanghai is a city wrapped in gold, bronze, and pink tinfoil. A metropolis ablaze, eager to show off a fresh face—a newfound youth—and was proudly setting the pace for the rest of the world.

Wealth is no longer exclusive to foreign socialites or business tycoons—high class living, or at least masterful imitations of it, is everywhere. Though governed by the Communist Party, the communist way of life, at least on the surface, seems mismatched with the city’s appetite for goods, glitz, and glamour. The dragon, so to speak, has new clothes. This is most evident in Nanjing road, a Mecca for shopaholics and tourists. Everything is lit up like Christmas; a year-round exhibition of lights, highlighting everything you wanted and then some. 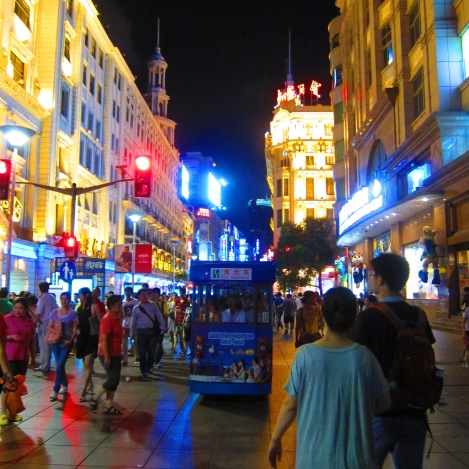 But, as tourist trappings go, it lacked the edge that I craved. I found myself going down strange alleyways, seeking danger, or at the very least, something different, something new—a story.

I found fragments—food stalls, curiosity shops, picture-perfect moments of city life—but Shanghai is too big and too busy to traipse around without a goal in mind. Yes, adventure tends to favour drifters and wanderers, but for a city like Shanghai, there are too many thoroughfares, massive roads, divergent districts, cultures and sub-cultures, cuisines, and Buddha knows what else, that getting it all down in a limited amount of  time would be impossible. 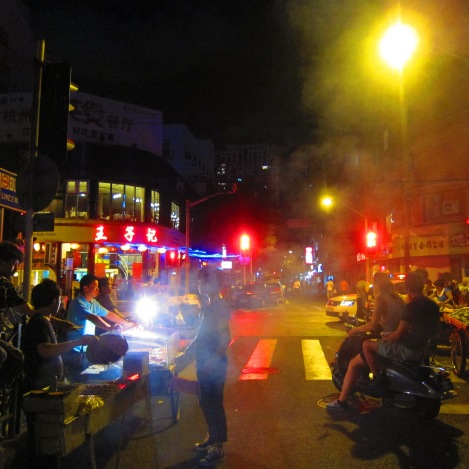 So I turned to art—one of the few things, apart from travel, where I feel the most inspired, at peace, and immediately transformed. And if travel is the vehicle, then I was certain to find bliss. I headed to M50, otherwise known as 50 Moganshan Lu or Creative Park, an art hub in the quiet, industrial Putuo district and near the Sozhou Creek.

But getting there, as it turned out, wasn’t so easy. Not for me, at least. I got lost, of course. Anyone who knows me knows that getting lost is as much a part of me as the two moles on my left cheek or that my nose is small or that my eyes are dark. That’s just the way it is.  I rode buses, made countless metro transfers, and bothered a multitude of strangers with my queries in unintelligible Mandarin. I was hot, hungry, and irritated. Plus, the heat and sweat had transformed my pants into second skin. I cursed the idea of planning. Tired from walking yet unwilling to take a taxi, I settled for a pedicab where passengers sit inside a small carriage attached to the back of the motorcycle. There is nothing, save for a thin piece of cloth, to protect one from splattering onto the pavement.

M50 is a dusty and gravel-filled area. Inside, rows and rows of buildings—a mix of cement, industrial structures and old brick warehouses—and at the center, a large glass-and-brick Balzac Coffee-type café filled with students and hipsters. 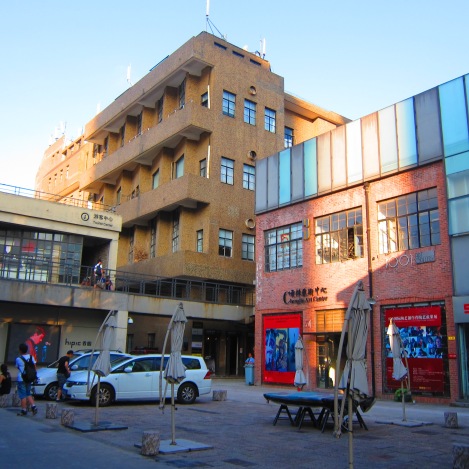 At first glance, M50 resembles a private college campus. A venture down the labyrinth of buildings, however, reveals an area that’s anything but uniformed or manicured. It is a city all its own. Administrative buildings with equally conventional galleries feature standard paint-on-canvas pieces with traditional Asian theme. Other areas showcase works that tests the senses, feature interactive pieces, or use cutting-edge materials. While other galleries, such as ShangArt and Island6, due to their sheer size, layouts, and deft curation, are artworks in themselves. Then there’s the graffiti—my favourite kind of art. Though the graffiti wall had been demolished before my visit, there is still an area that features ‘writing on the wall’ and various forms of urban interventions. (Though one could say that these structures were more examples of interventions—street art off the street—rather than the real deal real since the pieces are in a protected art space rather than in an actual urban landscape where the context plays as much of a role as the work itself.) However, the courtyard, which resembles a German bier garten, is still provocative. The colossal statue of Mao Zedong, the pole with multiple street signs, and the Anime-inspired mural, all portray the concerns of new China—the country’s struggle to break free from the past.

As the sky grew dark, most of the galleries closed shop, tourists exited, and urbanites made their entrance. A majority of women wore tight or shiny expensive outfits and heels, the men in dress jackets paired with concert t-shirts, and of course, those who resided in that creative universe, in uber-cool retro-chic garb. They were there for the opening of two gallery shows. I was an obvious outsider. The first gallery, the name of which I can’t remember, was an event. There were cameras, a luxe spread, and people who looked as though they were either local models or rock stars. The other opening was in Island6, which to this day is one of my favourite galleries. Island6 utilizes LED technology to create pieces that aren’t just interesting, but in some cases, interactive as well. The exhibit was called “Island of Oddities: The Yüan Meng Ch’ien Collection”. Indeed, the show held true to its name. From the goldfish aquarium to the eyes that followed you to the trapped creatures which were all LED-based pieces, felt like stepping into a strange nightmare—but a fantastic one. It was Murakami meets David Lynch meets Ripley’s. And I loved it.

I wasn’t, however, ready to call it night.

So I began again: countless train transfers, harassing strangers, and forays into strange dimly lit streets. But as I entered each techno eardrum-shattering bar—each place filled elbow-to-elbow with beautiful young things—I realized that hip and cool was not for me. All I wanted that night was a place to hang my sweat-soaked hat: a place to sit, to drink, and, if I was lucky, listen to good music. I had just about given up when I saw it: The Cotton Club. It certainly wasn’t quiet, but it was fun, it was simple, it was easy.  The club was part old man’s bar, part hepcat’s cradle. The crowd was a mix of locals, expats, and travellers. The house band was also comprised of an international set: an American guitarist, an Italian drummer, and a Chinese trumpeter.

I arrived in Shanghai seeking adventure and mystery, instead what I found was a city in transition. The old way, while still relevant, was no longer the only way. The city’s residents had not just embraced everything that was foreign and new, but had made it all their own.

I lit up a cigarette, took a sip of my much-longed for drink, and swayed to the music. I surveyed the room and found that nearly everyone—locals, expats, travellers—were doing the same thing. And for that brief moment, I felt at home.